Overview of the RMA: Natural and Built Environments Act

Overview of the resource management reforms A first draft of the proposed law that will replace the Resource Management Act 1991 (RMA) was released by the Government today.

Environment Minister David Parker said an exposure draft outlining key aspects of the Natural and Built Environments Act (NBA) will be presented to Parliament and then referred to a select committee inquiry. Covering land use and environmental regulation, the NBA is the primary replacement for the RMA which the Government has promised to repeal and replace. An exposure draft of a Bill is one that is put out for stakeholder and public feedback before it is introduced to the House. This process is intended to test and improve the contents of the Bill before it goes into the formal Parliamentary process. “The exposure draft is the first of two opportunities for people to give feedback on the reforms,” David Parker said.

“The initial select committee inquiry is a novel way to provide an open and transparent platform for the public to have an early say on this key legislation. “A second select committee process will be held when the full Bill is introduced to Parliament in early in 2022,” David Parker said. “This is a once in a generation opportunity to get this right, so we want to make sure we do get it right.” The select committee inquiry is expected to run for about three months and the public will be invited to make submissions on the exposure draft of the new Bill during this time.

The exposure draft for the NBA includes:

David Parker said the NBA is one of a set of new laws the Government intends to enact in order to create a resource management system that is fit for the future. “The RMA takes too long, costs too much and hasn’t protected the environment.

“The proposed NBA sets out how we can better protect and enhance our natural and built environments, ensuring that the way people and communities use the environment supports the well-being of current and future generations,” David Parker said.

David Parker said the NBA sets out the ways the proposed system will protect the environment. “A new national planning framework will provide clear direction on how the new system is implemented. This integrated set of regulations will include mandatory environmental limits that cannot be crossed to avoid irreversible harm to the environment.” “These limits will protect ecological integrity and human health. This includes limits relating to freshwater, coastal waters, estuaries, air, soil and biodiversity,” he said.

“For the built environment, outcomes include well-functioning urban areas, more housing supply and enabling infrastructure. The new Act will include choice for consumers, contribute to the affordability of housing and the productivity of our economy.” A new function in the proposed system is the setting of positive outcomes that are specified in the national planning framework for both the natural and built environments. “We have moved away from just managing effects of activities because the existing RMA has allowed cumulative adverse effects including degraded water, increasing climate emissions and soil loss.

“Clear direction will be provided to achieve positive outcomes for the quality of the environment, the protection and restoration of the ecological systems as well as outstanding natural features and landscapes,” David Parker said.

He said the new system will be more efficient and effective. “We are creating a system that will be less complex, take less time to administer and be less costly.” The exposure draft outlines how more than 100 existing plans and policy statements will be consolidated into around 14 plans across the country. “While not the sole cause of the housing crisis, planning rules are partly to blame. “Simplifying processes will also add to system efficiency,” he said.

David Parker acknowledged the invaluable help from Associate Minister for the Environment Hon Kiritapu Allan around the reforms and engaging with Māori, saying the stronger recognition of Te Tiriti o Waitangi and Te Ao Māori are important considerations within the proposed Act. The intention is for communities to work together to produce one mandatory Natural and Built Environments Plan (NBA plan) for each region. Having one plan per region that covers resource use, allocation and land-use management will better integrate plan provisions, contributing to a more cohesive management of the natural and built environment.

Why the system needs reforming

The Resource Management Act 1991 (RMA) has not delivered on its desired environmental or development outcomes nor have RMA decisions consistently given effect to the principles of Te Tiriti o Waitangi/the Treaty of Waitangi (Te Tiriti).

Current processes take too long, cost too much and will not address the many new challenges facing our environment and our communities.

New Zealand needs a resource management (RM) system that will manage these challenges more effectively for current and future generations. In February 2021, the Government announced it would repeal the RMA and enact new legislation based on the recommendations of the Resource Management Review Panel.

The three proposed acts are:

• Natural and Built Environments Act (NBA), as the main replacement for the RMA, to protect and restore the environment while better enabling development

• Strategic Planning Act (SPA), requiring the development of long-term regional spatial strategies to help coordinate and integrate decisions made under relevant legislation; and 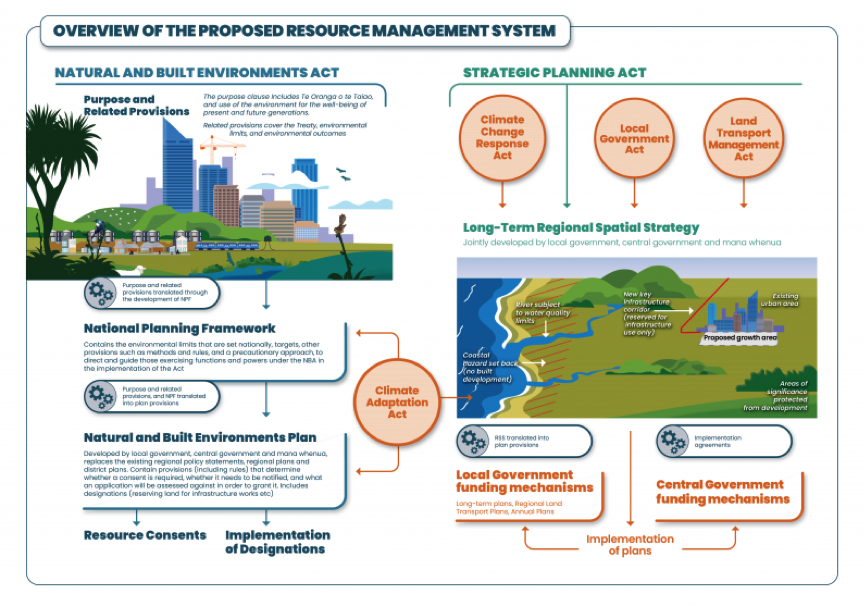 The Act sets out how the environment will protect and enhance the future system, ensuring people and communities use the environment in a way that not only supports their well-being but that of future generations.

This would be achieved by:

• promoting positive outcomes for both the natural and built environments

• ensuring that use, development and protection of resources only occur within prescribed environmental limits

The NBA will also improve recognition of te ao Māori and Te Tiriti o Waitangi. This includes reference to Te Oranga o te Taiao in the Act’s purpose. This concept is intended to encapsulate the intergenerational importance of the health and well-being of the natural environment. Decision-makers would be required ‘to give effect to’ the principles of Te Tiriti, replacing the current RMA requirement to ‘take into account’ those principles.

Under the Act, central government’s proposed new National Planning Framework will provide a set of mandatory national policies and standards on specified aspects of the new system. These will include natural environmental limits, outcomes and targets.

Together this suite of legislation will:

The way forward for reform

• The proposed Natural and Built Environment Act is the primary piece of legislation in the reform package and will be progressed initially through an exposure draft. An exposure draft refers to legislation that has not yet formally been introduced into parliament.

• The exposure draft of the NBA will include the most important sections of the Bill such as the overall purpose of the Bill and what it aims to achieve, the Treaty clause, the National Planning Framework and region-wide plans.

• The exposure draft will be considered by a select committee inquiry in the second half of 2021.

• The select committee will report its findings to Parliament and any changes will be made before the full Bill is formally introduced. Other components of the full bill that were not developed in time for the exposure draft will be decided by Cabinet before being included in the full Bill.

• The Natural and Built Environments Act and the Strategic Planning Act will be formally introduced in early 2021. • A standard legislative and select committee process will follow with the aim of the NBA being passed into law in by the end of 2022 and the SPA and CAA in 2023.

Parliament will hold a special debate on the Committee's recommendations on 18 November 2021 and the Government will release its response by 31 January 2022. This will inform the preparation of the full Bill, which is due to be introduced in mid-2022 alongside the Strategic Planning Bill. Both Bills will then follow a standard legislative and select committee process. The Government's aim remains to have the NBA and Strategic Planning Act passed into law in this parliamentary term.

The Ministry for the Environment has also indicated that it is working on a transition programme and in the coming months and will seek input on measures to support the successful transition to the new system as the programme develops.