Growing up: Hamilton's response to Government direction for growth and the changes we must make to the District Plan (our rule book for development.)

Hamilton is growing and growing fast. In the past few years, we've seen more and more people choose to call our great river city home. We're expecting that number to keep increasing, and we need to plan now for where those people will go and how they will get around.

Central Government has reset the rules for how big cities can grow and these are broadly set out in the National Policy Statement on Urban Development (NPS-UD). Amongst other things, the NPS-UD requires cities like Auckland, Christchurch, Wellington, Tauranga and Hamilton to grow up, not just out.

To do this, Council needs to make some changes to Hamilton's District Plan (our rule book for development). This means there will be changes to the rules around how you can develop your property and your neighbourhood. For example, in some areas we'll see smaller section sizes, more apartments and townhouses and no requirement to provide car parking.

But it also means it puts homes closer to all the things we need like shops, parks and public transport. It also provides a greater variety of homes in our city, to help make it more affordable for everyone who calls Hamilton/Kirikiriroa home.

The changes set out in the NPS-UD are not optional. Council has to make changes to the Plan to reflect the new rules.

However, making those changes provides a fantastic opportunity for the community to influence what Hamilton looks like in the future, while still aligning with the Government's growth strategy.

Council knows this may impact you and your property, so Council will be giving all Hamiltonians the chance to have their say and make their mark on the new rules from Government as much as we can.

Afterall, it's our place, Hamilton Kirikiriroa!

Over the next 12 months, Council will be working with the community, stakeholders and tangata whenua to find out what's important to them and what they wish to see for their own neighbourhoods.

This will be an opportunity to express your views about what's important to you as a resident of Hamilton Kirikiriroa.

What does that mean for your area?

Government has directed a new way of managing growth in major cities across the country. Its aim is to remove some of the red tape for New Zealand's largest cities to grow 'up', allowing greater heights and greater density in locations with good access to services, jobs and amenity (like shops, parks, and public transport).

This provides for more homes, and a greater variety of homes in Hamilton, to help make it more affordable for everyone.

Council is starting to investigate what this might mean in Hamilton and will require a significant amount of engagement with the communities, tangata whenua and stakeholders before any decisions are made.

In the central city Council required to remove any building height limits. In Hamilton we already have this in the District Plan for most parts of the central city, so Council don't need to make any big changes.

However, Council expects more people to choose to live in the central city as the population grows.

Council recently refreshed the Central City Transformation Plan. This will help guide any changes Council needs to make to the District Plan to support greater building heights and more people living in the city.

Walkable catchment from the Central City

In an area around the central city that can easily be accessed by walking, Council required to enable a minimum of six storeybuildings.

Having more people living close to, and walking to, the central city will boost the vibrancy, help meet climate change targets, and let people enjoy their city in new ways. A walkable catchment supports a 20-minute city concept, where people can access everything they need without getting in their cars.

These areas will be supported by quality public transport, walking and cycling facilities, parks and open spaces and nearby to shops and schools.

The rest of the city

There are lots of places in Hamilton that have good access to these things, outside of the Central City and the walkable fringe areas. These areas are therefore well suited to further intensification.

Council currently investigating what those areas are and how different types of higher density housing could work well.

In some areas already identified as having good access to public transport, jobs, shops and schools, Council is putting together area plans to help consider how these areas could be intensified.

Area plans will be created by a team of experts in consultation with the community over the next 12 months to help inform the changes to the District Plan.

There's more information about those areas below: 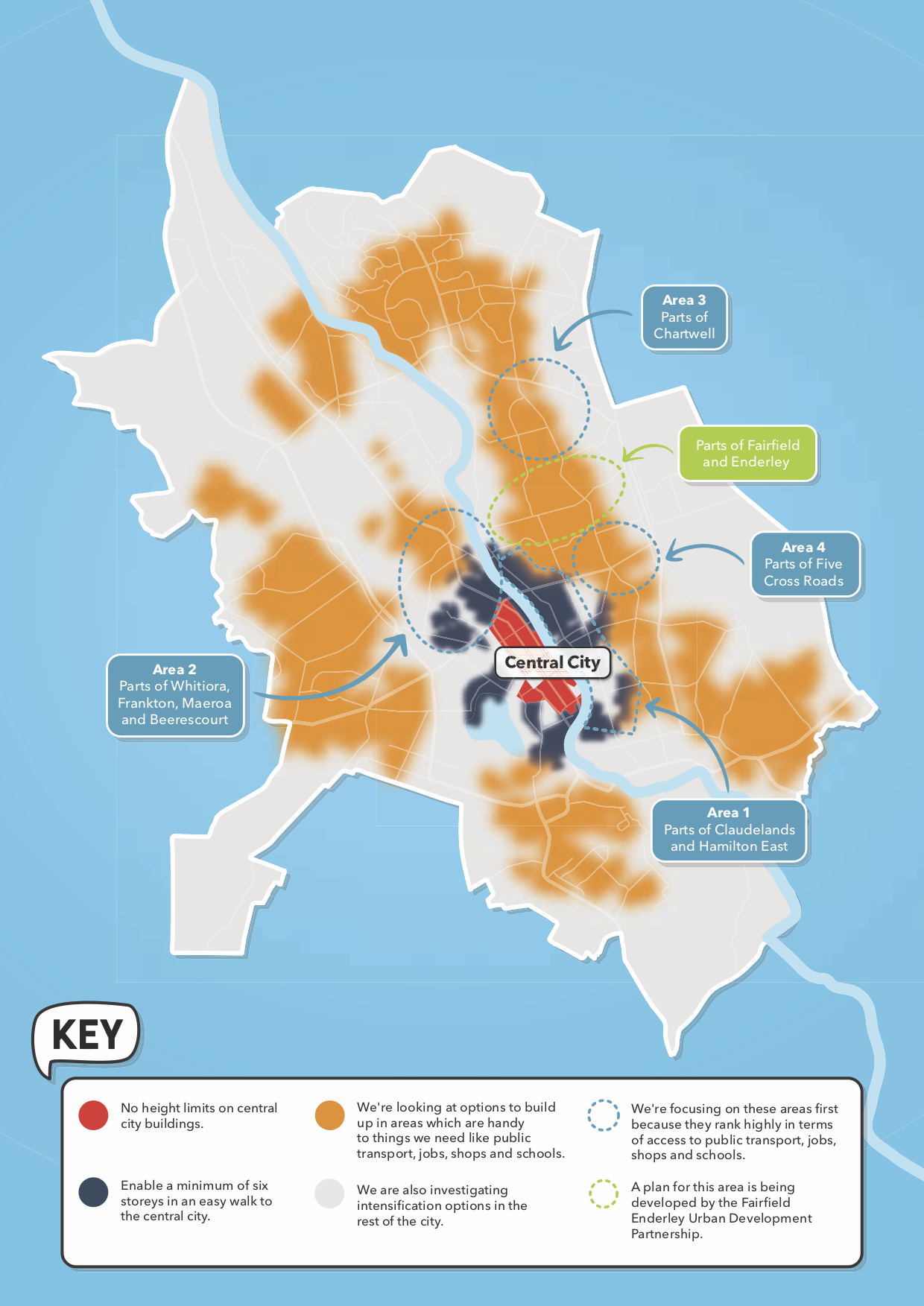 North of the Central City

Why north of the Central City?

We're only just starting this work, so nothing is set in stone. However, here's what we might see:

This area includes parts of Claudelands and Hamilton East.

This area includes parts of Chartwell centred on the shopping mall.

A plan for this area is being developed by the Fairfield Enderley Urban Development Partnership. Council and Kāinga Ora – Homes and Communities will work alongside iwi, mana whenua and the Fairfield and Enderley community to create a plan for the area. This is a separate piece of work that will inform the District Plan change next year.