The Process for Reform: RESOURCE MANAGEMENT IN NEW ZEALAND

A Government-ordered review released on 29 July 2020 has called to replace New Zealand's outdated, linchpin rulebook for the environment with two new ones – and also create legislation to deal with climate change impacts.

The top-level behind it has separately called for a shake-up of New Zealand's councils, arguing having 78 of them is "difficult to justify".

When the RMA was introduced in 1991 it contained a number of valuable principles which it is important to retain. One of these was the principle of sustainability to ensure the needs of future generations are taken into account. However, in the ensuing period of nearly 30 years, the RMA has been subjected to numerous amendments designed to improve its effectiveness but which have instead resulted in a doubling of its original length and an unduly complex patchwork of provisions.

Rather than attempt to amend the RMA, the Panel has concluded that the Act should be repealed and replaced with new legislation which we propose be named the Natural and Built Environments Act (NBEA). This would have a substantially different approach from the RMA but would also incorporate some of the key principles of the previous legislation which remain appropriate. The aim of the NBEA would be to establish more enduring solutions and bring to an end the series of ad hoc interventions that have been an undesirable feature of legislative change to date.

The independent review, commissioned by Environment Minister David Parker, explored what to do about the regulatory system built around the 30-year-old Resource Management Act (RMA). 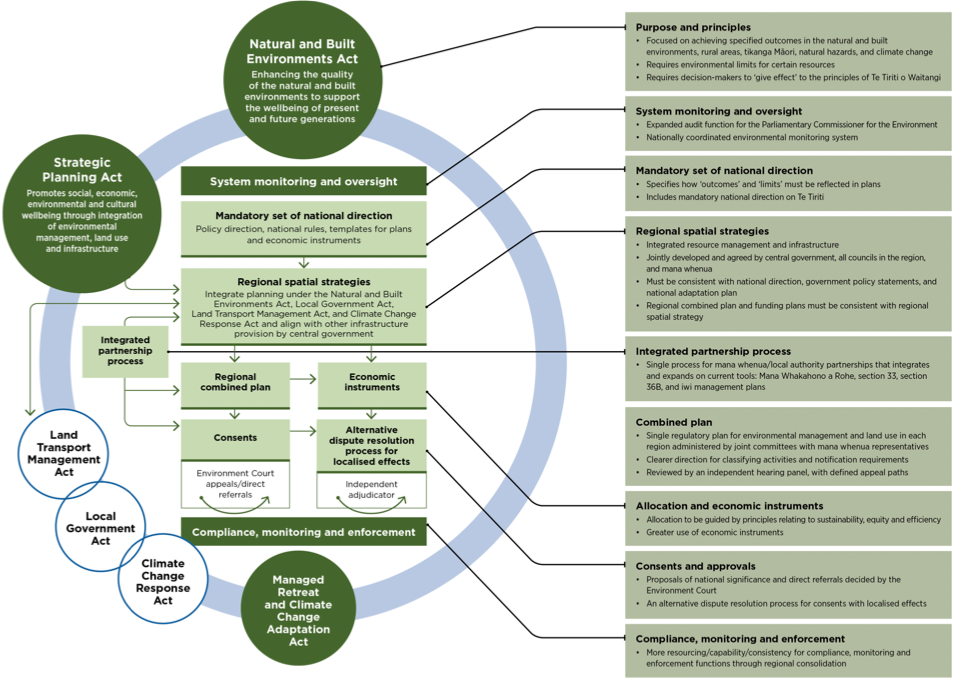 The NBEA would be the most direct replacement for the RMA, while the SPA would have the purpose of setting long term strategic goals and facilitating the integration of functions from across the resource management system (including the Local Government Act 2002, Land Transport Management Act 2003 and Climate Change Response Act 2002). If enacted the CCAA will establish an adaptation fund to enable central and local government to support necessary steps to address the effects of climate change. 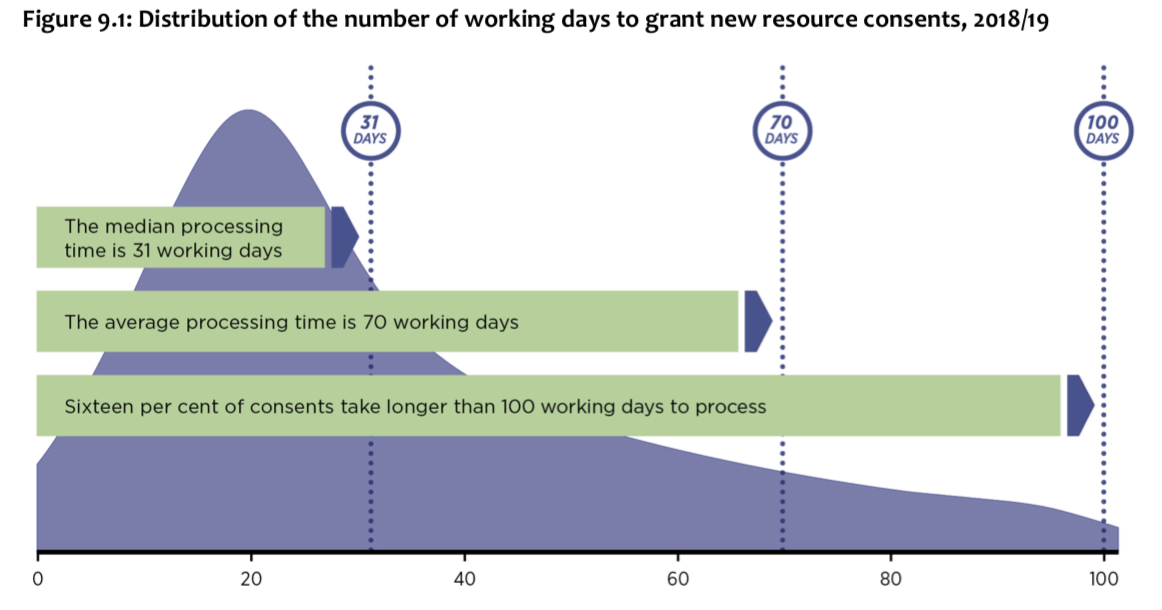 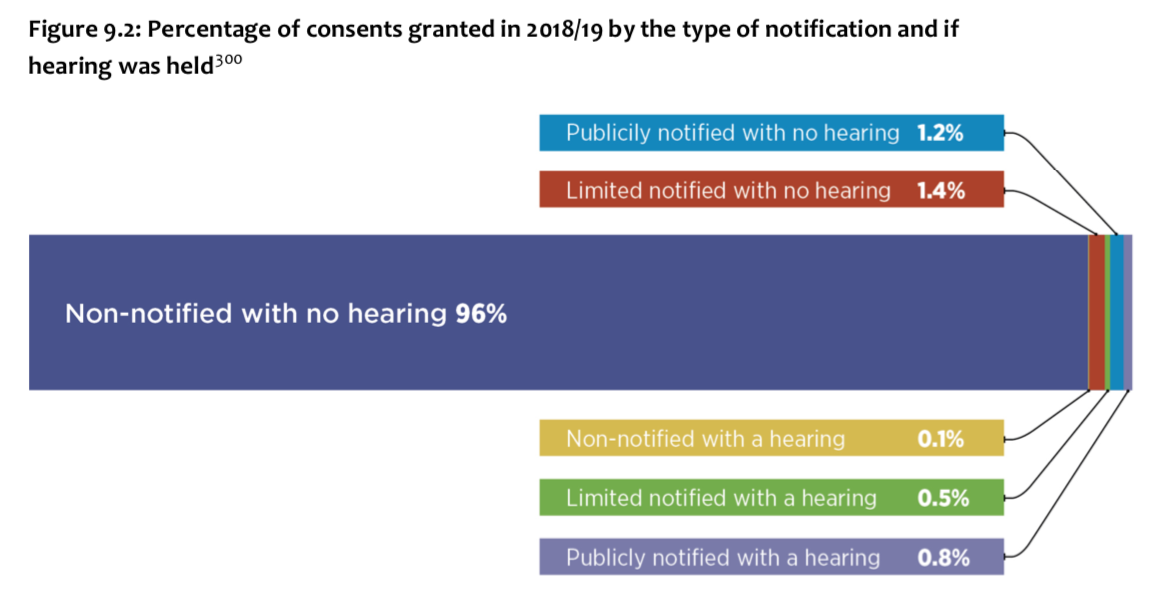 The combined effect of the SPA and the NBEA would be to significantly overhaul how local authorities are expected to approach planning for natural and built environments, with a focus on closer links between land and resource planning, and associated funding and investment.

The Panel proposes a new purpose for the NBEA: enhancing the quality of the environment to support the wellbeing of present and future generations. That purpose will be achieved by promoting positive outcomes for both natural and built environments, ensuring that the use, development and protection of resources only occurs within prescribed environmental limits and that the adverse effects of activities on the environment are avoided, remedied or mitigated.

The Panel recommends that regional and district plans should be combined and replaced with a single plan for each region (Combined Plans). In effect, there will be a single unitary plan (similar to the Auckland Unitary Plan (AUP)) for every region which will reduce the number of planning documents to 14, from the more than 100 that exist now.

Also, the Combined Plans could potentially release pressure through the integration of regional council and territorial authority functions. The upfront costs associated with the development of Combined Plans will be significant.

The Panel proposes that the NBEA should focus on outcomes for the built environment, as well as the natural environment, by including provisions to ensure that there is sufficient development capacity for housing and business land.

The Panel also proposes that the NBEA should contain a more explicit focus on climate change issues. The Panel’s recommendations focus on using the NBEA to reduce greenhouse gas emissions rather than merely managing the natural hazards that result from climate change.  The CCAA and NBEA together support the aim of a managed transition to a low carbon economy and are in line with recent developments in other New Zealand climate change legislation.

The Panel also proposes streamlining another arguably problematic area of the RMA: the plan preparation and change process. In particular, the Panel proposes that the Joint Committees (as discussed above) should have the authority to prepare and notify the Combined Plan. It also recommends a process similar to that used for preparing the AUP.

The Panel has also recommended clarifying the notification process by removing the 'no more than minor' effects threshold and replacing existing provisions with a combination of presumptions and plan provisions specifying when notification is to occur and in what form. 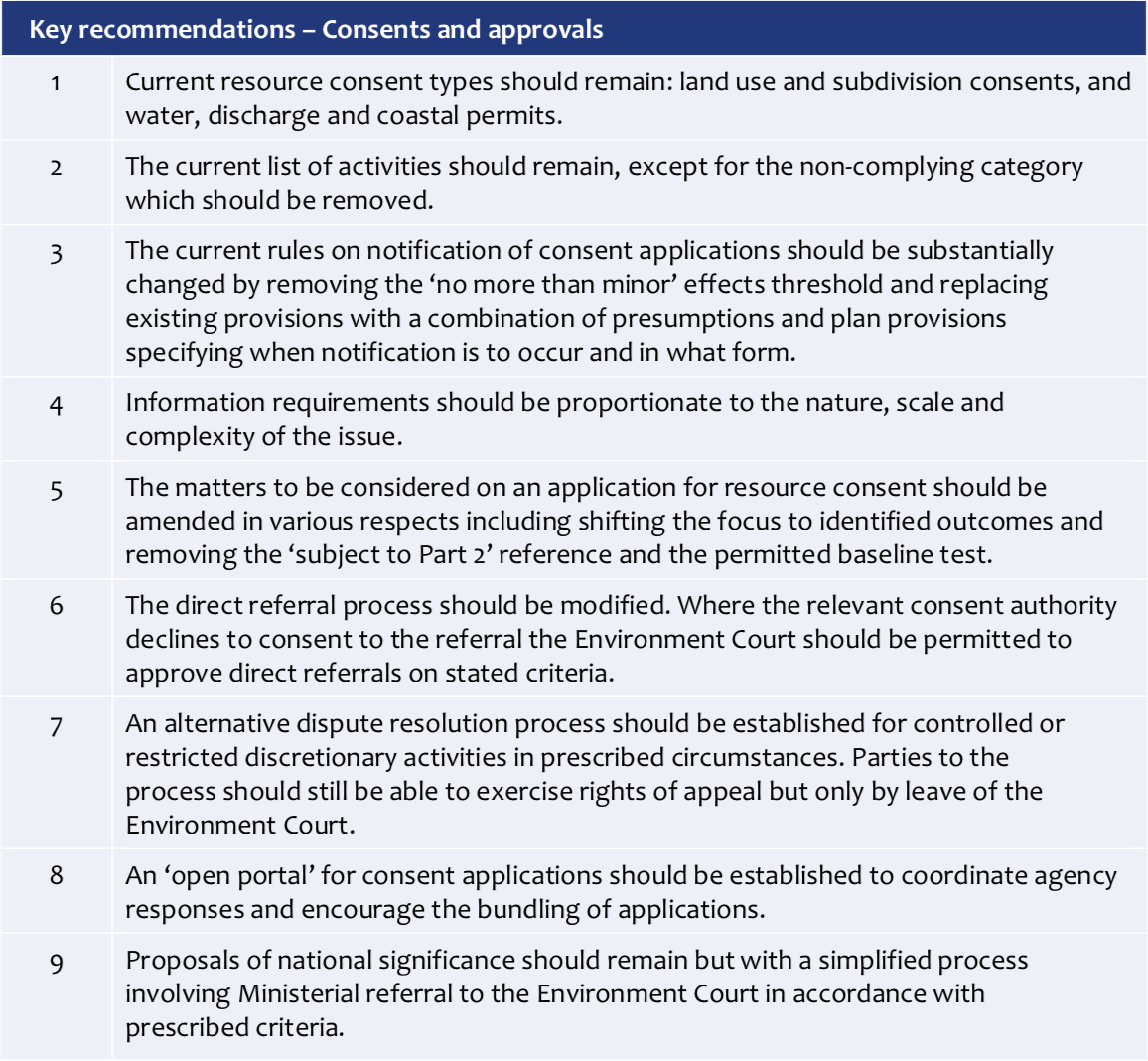 The Panel has also recommended a new separate piece of legislation which we have called the Strategic Planning Act. The purpose of the Strategic Planning Act would be to set long-term strategic goals and facilitate the integration of legislative functions across the resource management system. These would include functions exercised under the NBEA, the LGA, the LTMA and the CCRA to enable land and resource planning to be better integrated with the provision of infrastructure as well as associated funding and investment. The Panel’s consultation found strong support for greater use of spatial planning to identify areas suitable for development as well as areas or features it is important to protect. Spatial strategies developed at regional level, encompassing land and the coastal marine area, would play a critical part in delivering the outcomes intended for the resource management system. 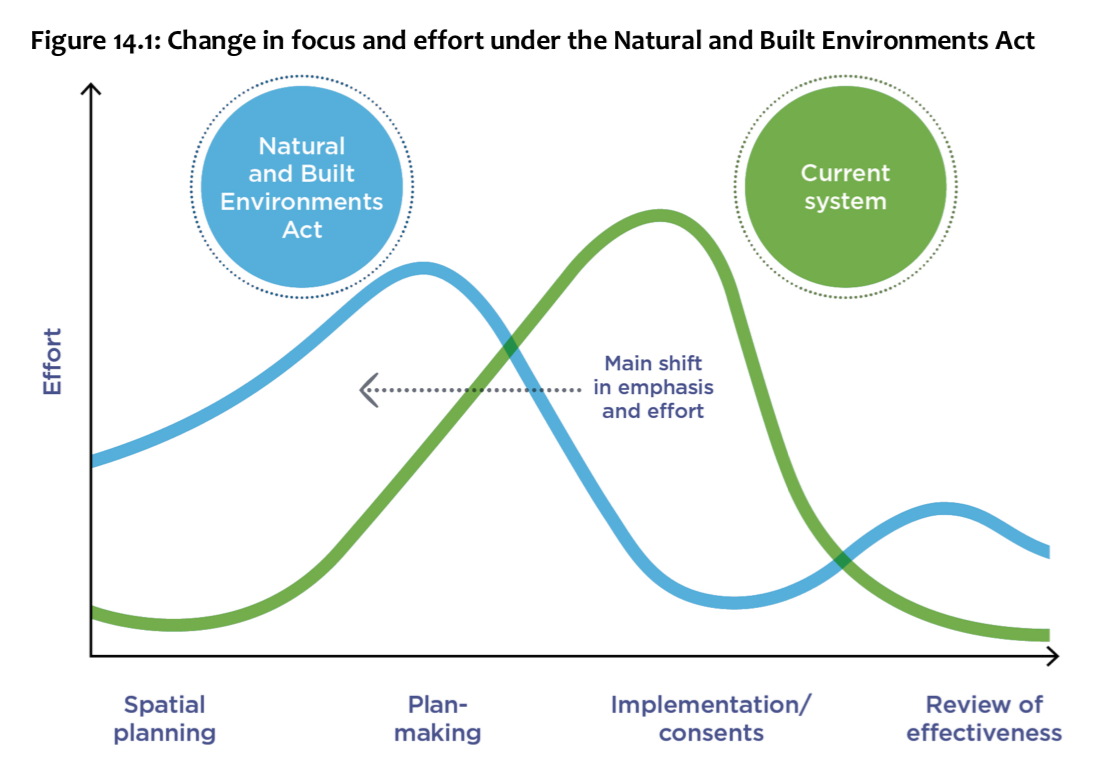 The preparation and approval of spatial strategies under this new legislation would be the responsibility of a joint committee comprising representatives of central and local government as well as mana whenua.

This new approach to result in stronger coordination between these parties in developing long-term strategic planning for both the natural and built environments, with closer links between land and resource planning and associated funding and investment.

One criticism of the purpose of the RMA has been its focus on managing the adverse effects of activities on the environment rather than promoting more positive outcomes. The Panel proposes a new purpose for the NBEA: enhancing the quality of the environment to support the wellbeing of present and future generations. That purpose will be achieved by promoting positive outcomes for both the natural and built environments, ensuring that use, development and protection of resources only occurs within prescribed environmental limits and that the adverse effects of activities on the environment are avoided, remedied or mitigated.

Cabinet has indicated that a broad, open process of public consultation will follow its consideration of the proposals. Wide engagement with New Zealanders and stakeholders is anticipated for the introduction of any new legislation.

The Process for Reform

An unusual but appropriate form of public engagement will be undertaken before draft legislation has its first reading in Parliament. An “exposure draft” of the NBA (Natural and Built Environment Act) will be prepared first, along with consultation material, and this material will be subject to an enquiry undertaken by a select committee, which will then make recommendations. The select committee will be supported by advisors, seek public submissions, and undertake hearings.

MfE will be the lead agency for the NBA, and the MOG will receive joint agency advice rather than differing positions. The cabinet paper states that “a more formal process may be needed to progress the SPA”, due to its connections with legislation.

The Cabinet Decision Minute notes that “a special process will be used to develop the NBA, and the SPA and CAA developed in parallel”.

A number of key debates are signalled and triggered by changes suggested by the Minister to the recommendations made by the RM review panel. These include:

The cabinet paper refers to past issues such as insufficient national direction, no template plan formats, and insufficient funding for the Environment Court. It indicates that resourcing and support will be required for: developing model combined plans; consolidating national direction into the National Planning Framework; incorporation of matauranga Maori; capacity and capability building; improved monitoring and reporting.

The Cabinet report notes that, so far, no Regulatory Impact Assessment (RIS) has been submitted for these proposals, although Cabinet’s impact analysis requirements apply. It states that an interim RIS will be provided to cabinet when it considers the NBA exposure draft prior to release.